It has been a busy half term for Herons with saying goodbye to Miss Jeffries and welcoming Miss Clyde, but they have taken it in their stride.

We kicked off the half term and our history topic with a Viking day. It was fantastic to see many Herons dressed up and enjoying the day. During the day we participated in a virtual workshop, researched key facts about Vikings and recreated Viking portraits using sketching pencils.

In this first week, Herons also enjoyed getting involved in a Shakespeare drama workshop. The class used their acting skills to bring alive characters from Macbeth. They used a range of drama strategies to explore the themes in the play and had a dabble at using Shakespearian language to devise their own interpretations of the script.

After Macbeth, our English work was centred around Beowulf. After exploring the tail, they created their own mythical creatures for Beowulf to defeat in their own section of the story. The class really tried hard to achieve the success criteria within their writing. This included using alliteration, fronted adverbials, superlative form, building tension in their narrative and using expanded noun phrases. Herons embraced the writing and editing process to make their work the very best it could be. I am sure your child will happily share with you their ideas about their narratives.

Both the Year 4s and Year 5s have successfully grasped our Mathematical concept using decimals and percentages. The Year 4s have been identifying, adding and subtracting money which they have all be keen to relate to real life contexts. The Y5s have been comparing fractions, decimals and percentages as well as adding and subtracting decimals using the column methods. Herons always work well collaboratively and thrive from completing mathematical challenges. The class will often share and explain their reasoning when solving mathematical problems.

In our Science this half term, we have been investigating how sound travels and starting to think about how we can hear. The class enjoyed making predictions based on what they already know and then carrying out experiments to prove their predictions. As well as the experiments, the children have raised some great questions during our discussions which lead to further research and investigations.

Finally, we have finished with a live Road Safety virtual workshop. They definitely took on these important messages and were able to explain why they were important after the workshop.

We hope you have a lovely half term break with (hopefully) some long awaited sunshine.

It can only be described as a very unusual Spring Term for us all, but it was fantastic to have all us back together for the final 4 weeks of term. It was great to see us all back in school and returning to old routines and friendships so positively!

In Maths, we spent time looking at fractions and at times this was challenging! Following this, we moved to position and direction where we learnt about the x-axis and y-axis. Using this knowledge we then explored translation of shapes and how we can describe this movement. Following this, we investigated lines of symmetry and used this to reason and problem solve.

'Electricity' has proven to be one of our favourite science topics! We made different electrical circuits using buzzers and bulbs. We spent time investigating complete and incomplete circuits before identifying what makes the best conductor and insulator!

This linked fantastically to our English unit - where we researched the advantages and disadvantages of deforestation. We focused this around a book called The Great Kapok Tree, where we spent time thinking about the thoughts, feelings and motives for some of the characters. We were very excited by writing these on the tables! We investigated different reasons of why deforestation were positive and negative before using these to create a balanced argument.

During music lessons we have learnt about Samba music, we have played a variety of different instruments including the Ganza, Go Go bells and Repinique drum.

We can't wait to start the Summer term! Especially our viking day where we will be taking part in a a workshop for the Jorvik Centre. In English we will also be starting the play of Macbeth and participating in a drama workshop! 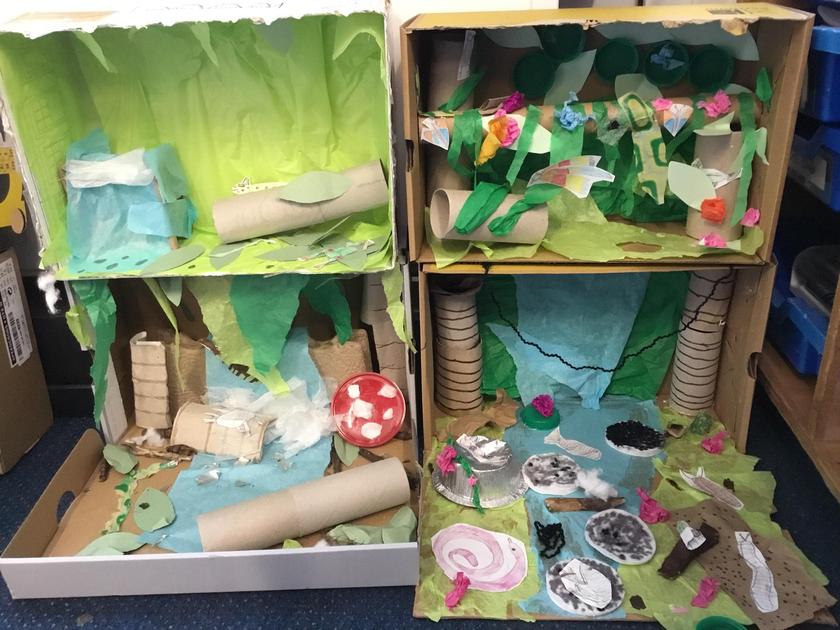 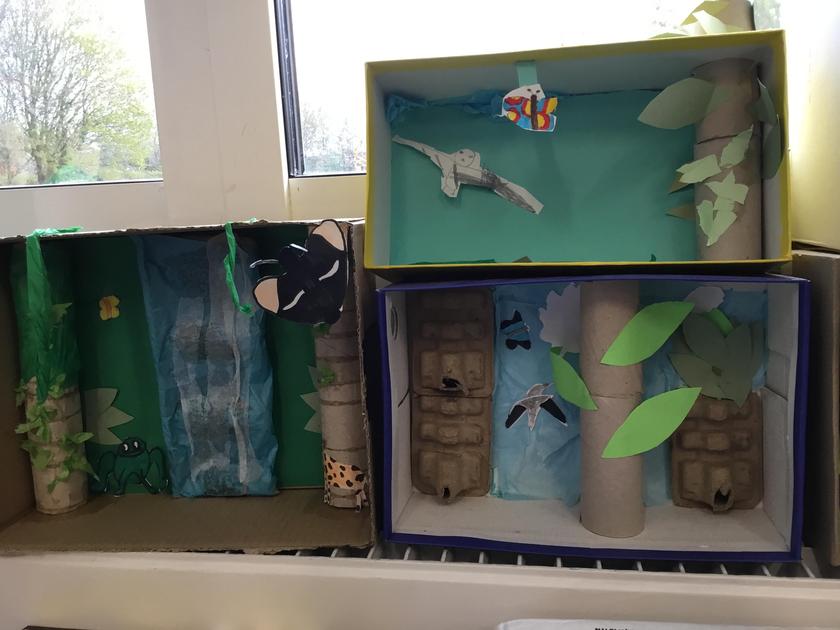 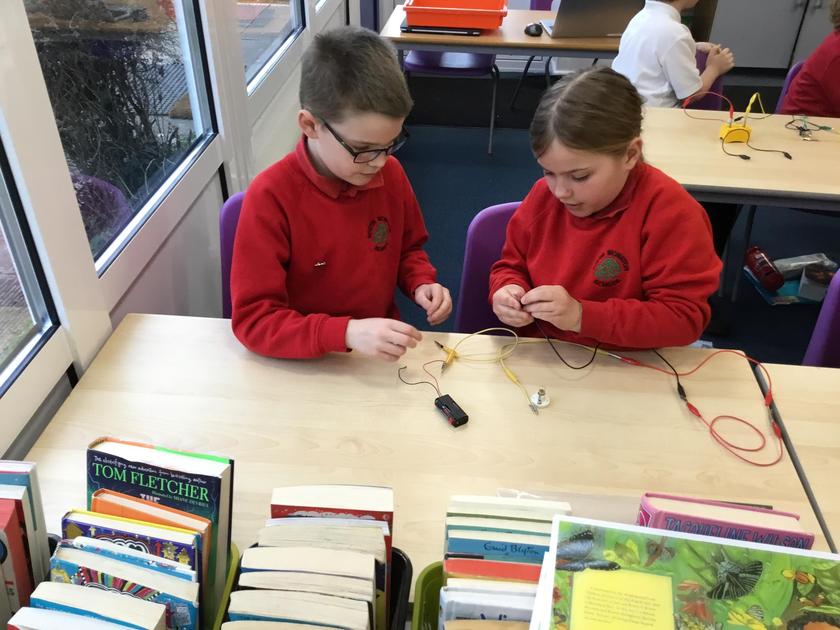 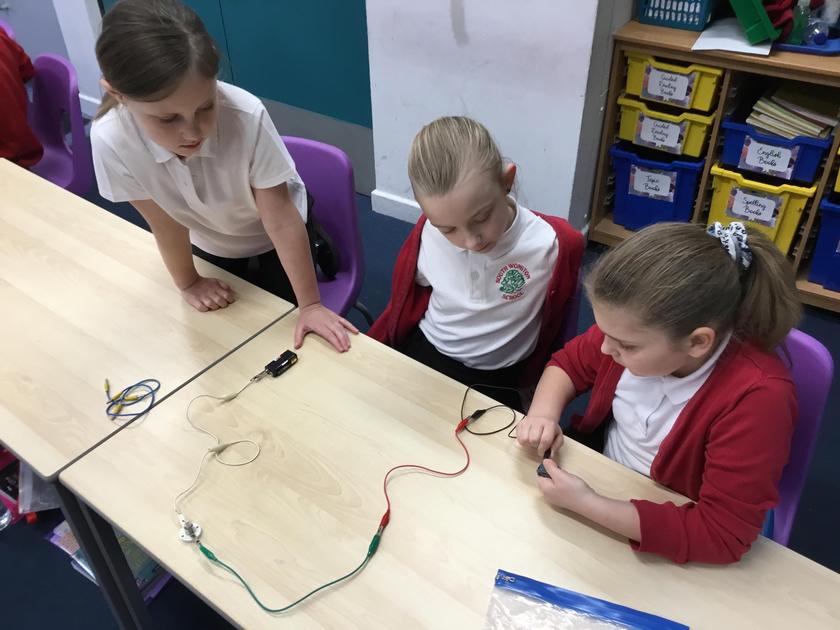 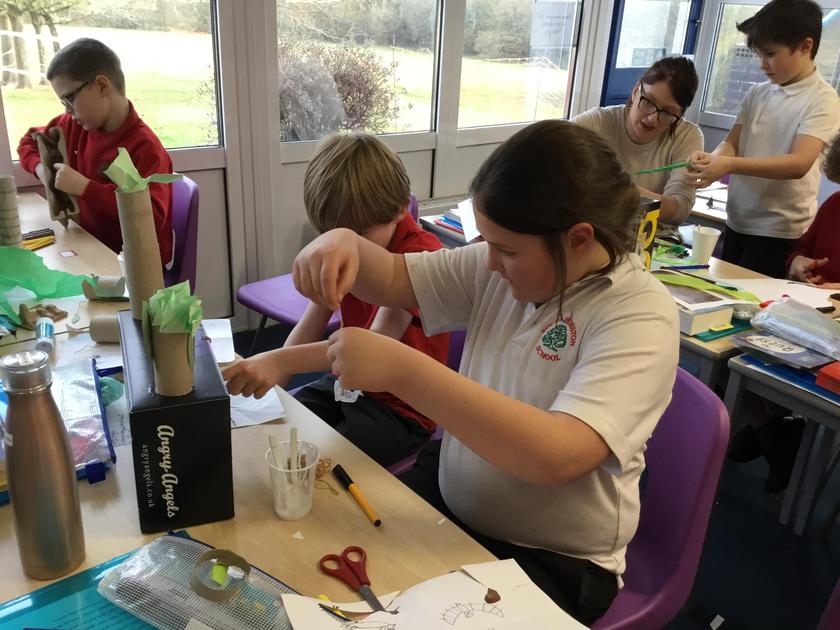 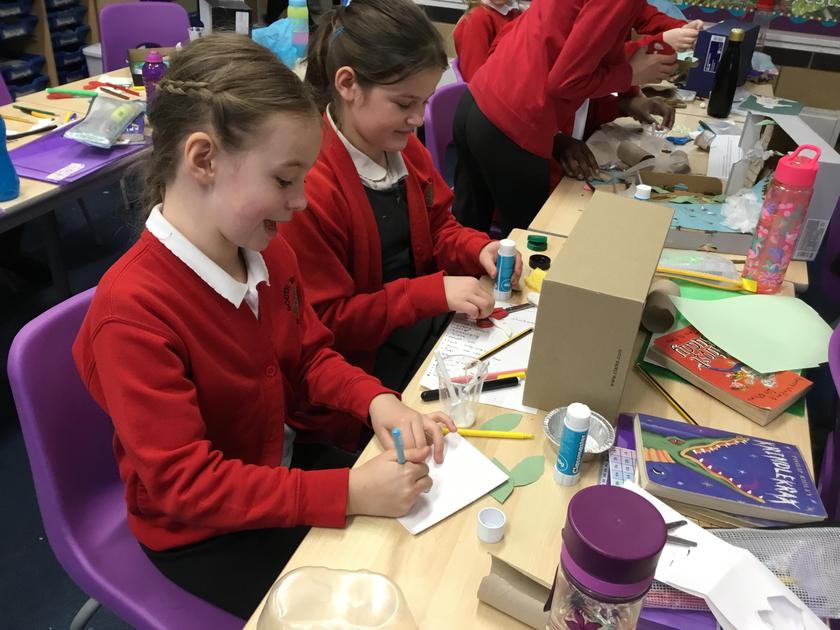 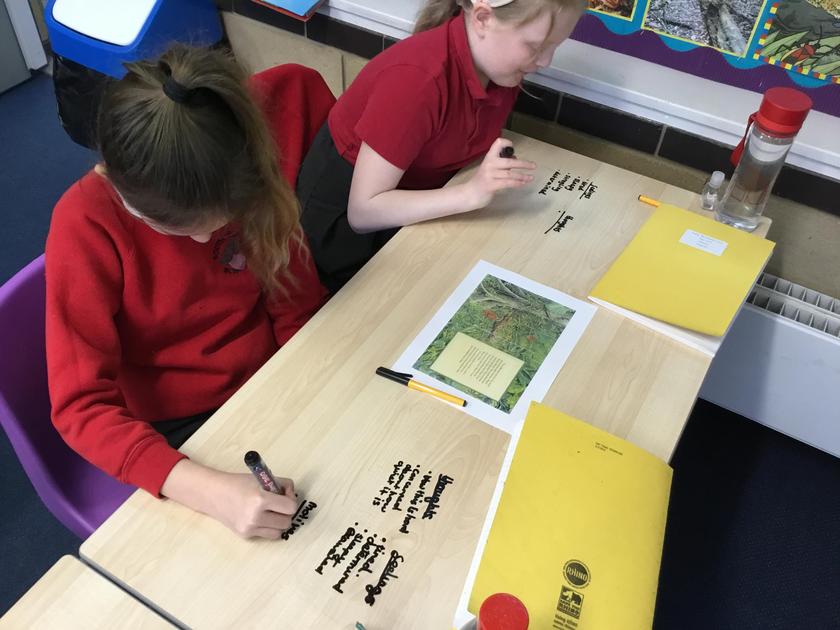 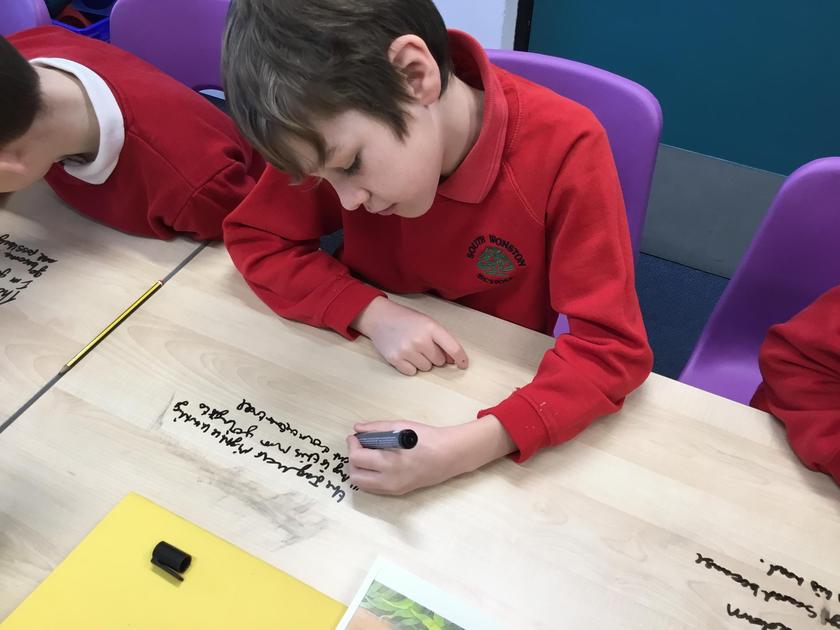 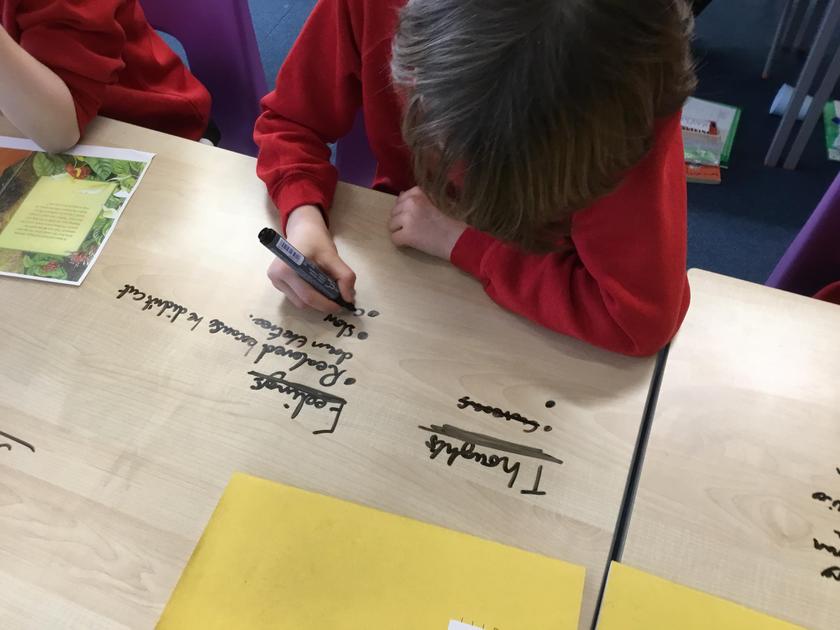 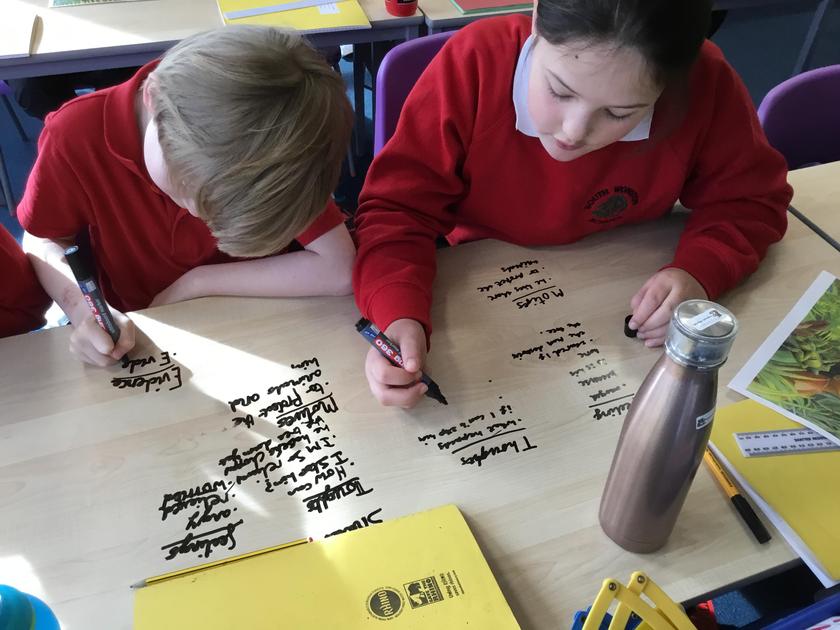 I can't believe I'm writing this at the end of Autumn 2 and our Christmas celebrations, it has been a fun and exciting half term where Herons have excelled themselves in so many ways! They have been a true pleasure to teach this term and have thrown themselves into lots of different aspects of their learning.

This term we have been concentrating on improving our multiplication and division skills. Year 5 have enjoyed investigating common factors and multiples whilst Year 4 have developed a good understanding of their times tables and how to recall them quicker! We have then applied our knowledge to area and perimeter and finding these measurements for a variety of rectangular and rectilinear shapes.

In English we started the term by looking at the story Escape from Pompeii, we used our senses to investigate the different things we might see, smell, taste and feel both before and during the volcanic eruption. Using this we wrote two diary entries. We aimed to include a variety of adverbial phrases and fronted adverbials to make our reader more engaged. Following this, we then looked at a book called Pet Dragon. To begin with, we designed our own dragon and used a thesaurus to improve our choice of adjectives. We then wrote descriptions of different parts of the dragon to form the basis of our non-chronological report - appearance, habitat, diet and interesting facts! We also had to write an exciting introduction to appeal to the reader!

Science has been so much fun this term! Our first lesson involved investigating a variety of different substances to see if we could identify what a solid, liquid or gas was. We then created our own water cycles and discussed the different elements of this. Our chocolate experiment was definitely the best part though where we discovered that different objects have different melting points.

We started the term with our Roman Day where we launched our topic! It was a really exciting way to get us thinking about the Roman Way of life! We designed and created our own roman mosaics and used biscuits to replicate the way romans made roads. Later in the term we also had a virtual workshop from Fishbourne Palace - although we were disappointed we couldn't go there in person it was exciting to see the Roman weapons and find out what life would be like for roman children.

I think they deserve a well earned break and look forward to seeing them rested and relaxed in January! Have a fantastic Christmas!

What a fantastic term back in school for us all! It has been delightful to see smiling faces coming through the door each morning despite feeling, for some of us, very nervous! Herons have approached the new school year with a huge spring in their step and they have made a brilliant start to the new school year!

English has been brilliant this term! We began by watching the short film 'Ruckus' where two brother, Frank and Jesse, hijack a train to steal a valuable ruby. We designed wanted posters which described one of the brothers and hoped that someone would identify them so they could be caught!

We then used our Guided Reading text, Kensuke's Kingdom as our stimulus for writing a variety of poems. We thought about different types of poetry including Haiki and Tanka poems which use a certain amount of syllables. Our poems have been collated into our own anthology which we can read in our classroom.

In science, we have been exploring the environment around us discussing the positives and negatives! We have investigated the wooded areas to see what creatures we could find and identify and will continue this throughout the year to observe how this environment changes. We have looked at how humans can have a negative impact on our environment but also the changes we can make to improve it! Over the year we will make a hedgehog highway to ensure that hedgehogs have enough room and a bug hotel!

Our topic has compared where we live in and around South Wonston to Bologna in Italy. We compared our daily lives to children in Bologna and also identified both physical and human features of both areas. By unanimous decision, most of us would rather live in Italy. Although we identified that our lives were quite similar it was hard to ignore the weekend ski trips that some of the children in Bologna went on!

We have focused on our school community this term and how our actions affect others around us. We discussed as a class rewards and consequences and what we enjoyed about being in school environment. We also thought about some of the things we would like to see in our classroom and therefore our Super Heron table has made a return by popular demand!!

Thanks to our amazing music teacher, Mr Jones, we have been learning the guitar! We have mastered how to hold the guitar and have now been focusing on learning particular notes. We are confident with playing a basic tune and ensuring that we stay at the same rhythm.

It really has been a busy term! But we have loved every second and can't wait to see what Autumn 2 will bring us!